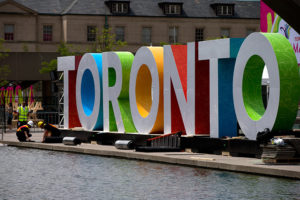 Workers erect giant letters spelling out Toronto in Nathan Phillips Square as they prepare for the Pan Am Games, Wednesday, July 8, 2015. The 2015 Pan Am Games officially open in Toronto on July 10.

Margarita De Antuñano’s parents were supposed to be here.

Instead, the septuagenarians are home in Cancun, missing their granddaughter’s high school graduation and the Pan Am Games – all because of a complex visa system they finally decided wasn’t worth navigating.

“They got halfway through and then they gave up. It was just excruciatingly hard,” De Antuñano said.

“It’s a list of over 15 documents that they need.

“And in Mexico, really, the sentiment is like, ‘Oh, we love Canada but they have made it so hard for us to go visit that we just don’t bother any more.’”

The De Antuñanos are just two of the casualties of Canada visa requirements for Mexican tourists, which have chilled relations between the two NAFTA partners and put a damper on tourism for the Pan-Am Games.

…An Ontario Chamber of Commerce report last year on potential economic impacts of the Games called on the federal government to “eliminate needless complexity in the Canadian travel visa application process,” and “where possible … eliminate the Canada visa requirement” entirely.

Last week, the head of the Greater Toronto Hotel Association told Global News hotel bookings are “starting to move” but are still below where he’d like them at this point in peak summer tourism season.

…Tourism Toronto Executive Vice-President Andrew Weir isn’t surprised to hear that. When Canada visa requirement in place six years ago, he said, Mexican tourists flocking to the Toronto area dropped from 80,000 to below 20,000.

“The visa situation from a number of countries, including Mexico and Brazil, has been a real challenge over the last number of years,” he said.

“Other countries, they’ve just made it easier, faster than Canada has,” Weir said.

“And it has put us at a competitive disadvantage.”

Citizenship and Immigration spokesperson Bruce Hicks said in an e-mail the federal government “is committed to facilitating legitimate trade and travel.” He noted Ottawa has established a program meant to expedite tourist visas for repeat visitors from multiple countries, including Mexico, China, India and Brazil. That program comes into effect in March.

“Citizenship and Immigration Canada (CIC)  worked closely with the Games Organizing Committee, TO2015, to make it as easy as possible for Games participants and officials to enter Canada,” he wrote.

Canada has required Mexican tourists to get a visa since 2009 – ostensibly to curb high numbers of refugee claimants.

But the move soured relations with Mexico and has prompted calls from businesses, tourism boards and politicians to reverse it.

“Canada has the most stringent visa system for Mexicans of any country in the world.”