The 18-year-old Markham student is hoping Canadian Immigration Minister Chris Alexander will see the four-minute clip, “Waiting for a Miracle,” and reverse the department’s decision to force them to leave.

Their deportation, scheduled in December, was suspended after the federal court agreed to review the immigration department’s rejection of their latest humanitarian application. 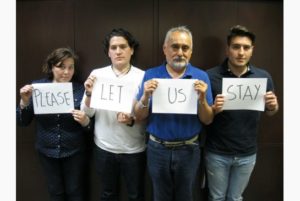 In April, the court dismissed the appeal. A removal order is pending.“All individuals have the right to due process. However, once they have exhausted all legal avenues, we expect them to respect our immigration laws and leave Canada, or to be removed,” immigration spokesperson Bruce Hicks said Thursday. Gonsenheim said they were devastated when they received news of the court decision because they consider Canada home and both parents have jobs here.Two weeks ago, after a talk with a psychologist friend about the power of social media, his brother, Alejandro, suggested he make a video for YouTube.

Wish all the best for Armando Lazcano Gonsenheim and his family.