EDMONTON – A par­a­lyzed for­mer tem­por­ary for­eign work­er Canada has been grant­ed a two-year work per­mit that voids her de­por­ta­tion or­der and al­lows her to stay in Edmonton.

“I have two years I don’t need to worry every night, wake up in the mor­ning, that maybe they’re just go­ing to de­port me,” Vicky Venancio said in an inter­view. 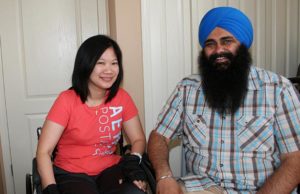 [as a temporary foreign worker Canada].

“What she needed was to have legal stat­us to stay in Canada,” Hoffman said. “Now that the federal government has authorized that, we can give her the health care support that she is so rightfully entitled to.”

Hoff­man met with the 29-year-old ear­li­er this month, and later con­tacted the fed­er­al de­part­ment of Citizenship and Im­mi­gra­tion Canada to en­cour­age the new work per­mit, she said.

“You can’t help but feel in­spired by her strength,” Hoffman said. “She is such a strong woman to be­come a quadriplegic and have it hap­pen when you’re halfway around the world.

There have been many changes to the temporary foreign worker Canada program. Including an increase to application fees for Canadian Labour Market Impact Assessments to $1000. Also, refusing applications in areas of high unemployment such as food counter attendants, grocery clerks and cashiers just to name a few.

This article is heart warming. Displaying the compassion of Canada.